The articles are starting to surface about my new series with Green Wake cohort, Riley Rossmo. Here’s a great article about the series where I inform CBR about the very bones of the story.

In the meantime, here’s a stack of images from the series. 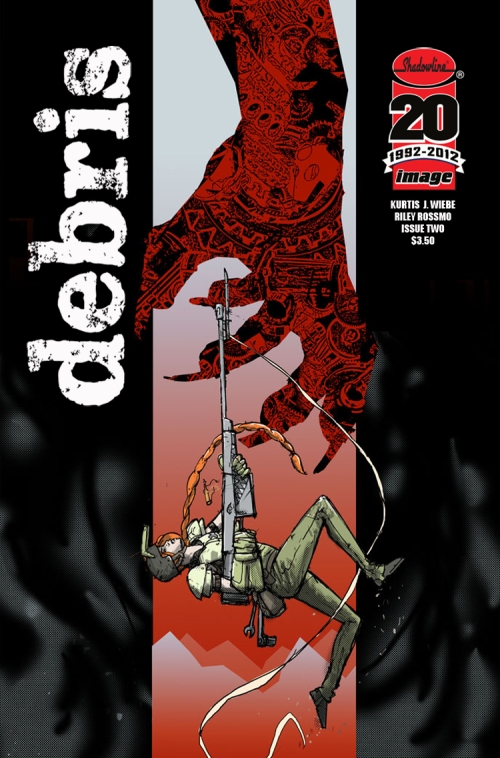 I’ve been working for Day 21 Studios since September 2011 developing content for their upcoming IOS and Facebook game, Sky Pirates of Neo Terra. My main task has been writing a series of web comics for the team that have been illustrated by Camilla D’Errico. It’s been a great experience and I’ve enjoyed all the work I’m putting together for the company.

It was a bit daunting at first. I was worried I wouldn’t be able to write strong scripts for a concept that is targeted at an all ages audience, but as I familiarized myself with the world it started to come together nicely. Posted below is probably my favourite script I wrote so far, introducing one of the racers known only as “The H”. 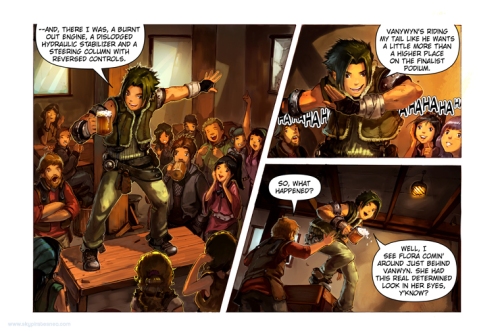 For more about the game, you can visit their Facebook fan page here:

And to see the webcomics I’ve written, check out this site:

We Write Because it’s Who We Are

I wrote an introduction for the twelfth episode of the podcast I created and co-host called The Process. It was meant to be a point of reference for some friends who’d found the journey to published comics a difficult path and were ready to throw in the towel. When I finished writing the piece, I realized it was just as much for me as anyone else out there who tuned in. Here’s the write up. For those who want to hear it read with some nice dramatic music, here’s the actual podcast.

We Write Because It’s Who We Are

Panel 1. Over head shot. A self deprecating writer clutches a greasy grilled cheese as ice cold water splashes over his shivering body. He’s crying, but the water masks the tears… and the pain.

I write because no one really understands sandwiches like I do.

Panel 2. A young man sits on the floor of his bedroom, back against the closed door. His head is bowed, his eyes are closed. He grabs the hair at the side of his head, as though ready to rip his scalp from his skull. The lettering drifts from the small crack between the door and frame, tumbling down towards him and swirling around his head. His partner is driving him mad.

I write because it’s the only voice I have.

Panel 3. This woman, a smouldering beauty with dark eyes, stares to the camera from across a crowded room. Her gaze cuts through the mass of people as though there is a kinetic power to her brilliance that no force on earth could repel. She’s wearing a playful smile, inviting us closer. Beckoning us into her story, daring us to follow.

I write because I love her.

Panel 4. He stands, hunched over a register, blank and broken. His finger is pressing the same button it presses day in and day out. Cash. There is a line of 20 people, all wearing the same hollow expression. Everything outside of this destroyed cashier and his zombie consumer horde is blank. There is no background, no colour, only a slab of infinite grey, white and black.

I write because it makes me come alive when everything else fails.

What are your reasons for writing? Why do you do it?

If you knew right now, with absolute certainty, that you would never see your creative work put to paper by a publisher, would you give up that part of yourself completely?

I ask that question because I almost did, once. I gave myself a deadline, I promised that if this didn’t all pan out by the time I was thirty that it was time to admit I didn’t have what it took and to accept my fate.

I’m going to let you in on a secret.

I didn’t almost give up. The truth is I completely gave up. I got so sick of trying that I didn’t type a single sentence for almost a year. I hated writing and everything it made me feel about myself. Like a fucking failure.

Then, one day, something happened to me, something painful and I had nowhere to turn. I sat down and I wrote it out in a fictional place with fictional characters. I didn’t do it to get published. I didn’t do it with the intent of anything more than letting my voice live again. It wasn’t long before stories spilled out of me and the passion returned.

I wasn’t writing with a deadline anymore. I was writing because I’m a goddamn writer. I always will be, even if everything falls apart and I never have a published comic again.

I will always write.

Today we discuss why.

The four page teaser showed up in Peter Panzerfaust #3 yesterday. In case you haven’t had a chance to read the issue (I’m sure you’ve just not been able to get to the store, of course) I’ve decided to post them here for your enjoyment.

In the far future, humanity has doomed planet Earth to rot and decay, covering her surface with garbage.  Now, ancient spirits called the Colossals rise from the debris and attack the remaining survivors, forcing the human race to the brink of extinction. One warrior woman, Maya, sets out to find the last source of pure water to save the world before the monsters bring it all to an end.

I generally don’t post these types of topics on my blog but there was a recent string of interviews before and after ECCC, so I’m collecting them all here for you to read or listen to. Lots of talk about my upcoming projects as well as looking back on Green Wake and Intrepids. Enjoy!

And, one from Image Expo, a video interview with Ifanboy:

The Yank Shots has been a story that I’ve been working on for years. Seriously, years. In fact, it’s based on one of the first scripts I ever wrote. I’m going to guess this goes back to 2006 when I first came up with the idea and then a year later hired an artist to do the sequentials for a pitch.

Obviously the story never went anywhere and I shelved it. Back then, when it was called Wrench, I thought it was the best idea of all time. Ever. Going back to the original script is painful now, so painful I can’t actually muster the courage to finish reading.

Anyway, over the years I’ve attached numerous artists and seen the project fail each time. Until a month after NYCC 2011 when I had the amazing opportunity to meet the impossibly talented Andrew MacLean. We talked about the project for a week or two and when he sent in the sketches, the narrative began to change. First, let me show you the original synopsis:

Set in Rio de Janeiro,Brazil, somewhere in the near future, the story of Wrench follows the tortured life of a man named Vicente Botella Rodriguez. He is an individual who finds himself in the uncomfortable position of being the avenging hand of God.

So, when I got the following in an email from Andrew, it sent my brain in a completely new direction.

It was at this point that I went back to the drawing board and completely rewrote the concept but keeping integral parts intact. No longer set in Brazil and making the story a bit more current, I drafted a brand new script and sent it to Andrew. This is what became of it.

Sadly, no takers yet on a publisher. But, we forge on.