Conan: Blood of the Cossian Fallen – An RPG Podcast

Last Friday I sat down with three friends to play the very first session of our Conan d20 game. We also decided to record the session and, while I’m not sure yet if that was a good idea, the concept is to post the sessions and have an ongoing podcast of our adventures. While it seemed like a narrative driven firecracker, I suspect that might’ve been the cider talking.

So, here is the basic premise followed by the write up that I read to the players at the start of the session. My players were: Jordan Groves, Lonnie Nadler and Zac Thompson. All three were new to the system and two were unfamiliar with the Conan setting.

The premise is that all three characters are ages 14-16, on their first hunt with their parents who are the protectorates of the village. Should they succeed, they are inducted into the Blood, the elite warrior caste of their village and, when the time comes, replace their parents when they inevitably die in battle.

Tonight the skies are clear and the stars paint the sky with good omen. It has been a long journey. Three days, three nights. Your muscles and bones ache, the needling cold of your trek through the Eiglophian Mountains still stabbing through you despite the raging fire you’re gathered around. All of you have survived the peril and, despite wearing a mask of bravado, the experience has taken a physical and spiritual toll. 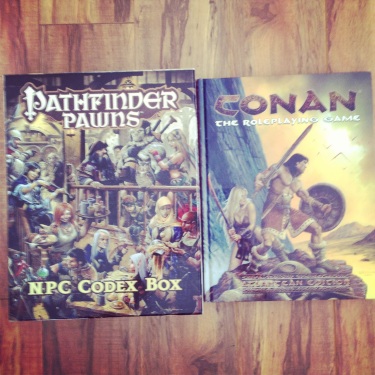 Crom has demanded much of you, yet this is only a brief respite on the night before your first hunt. It is as it has been for five hundred years before you came bloody and screaming into the world and as it shall be long after you die in the same glorious way.

The Blood, your parents whom one day you will replace, mock your youth. As you gather around the fire, leeching warmth like your body has never known it, they pass around a tattered waterskin and drink deeply of mead. Their veins course with it. You have not earned the right to drink from the ceremonial artifact, the skin they call The Gut.

As Chief Torgun and his pack of mongrel warriors taunt and roughhouse, a light arcs across the sky and suddenly all is quiet. All eyes turn to the burning star.

“Crom has vanquished his enemies, casting them from the heavens to the abyss.” the chief mutters. “It is the sign we will have a fortuitous hunt.”

The Blood nod and mutter, slowly passing the Gut between them.

The chief sits in the circle by the fire. His eyes are open but see not the physical world. They see the fate of his people in the young blood gathered around him.

A silence hangs as he looks to each of you. A life time of battle and blood pools in his gaze.

“But you are not immortal. Crom does not protect the weak. He casts aside the mewling whelp. Chews on the bones of the coward. To survive, to become one with the tradition of the Cossian tribe, you must survive while Crom taunts your inevitable failure from the heavens. Be at peace with his vulgar disdain, make it a lover and fuck it. Only then can you prove to Crom you are worthy.”

Another pause as a wild grin scrawls across his scarred face.

“Because I can promise you one thing. Crom will fuck you if given the chance to do so.” 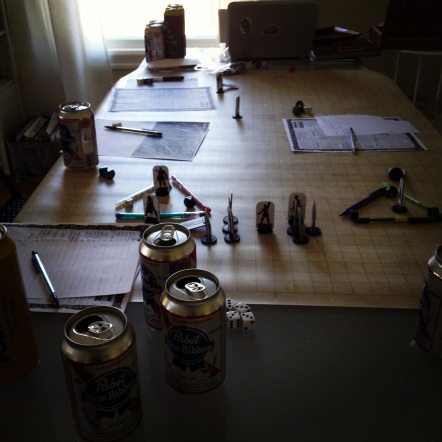 The Blood erupts in laughter and cheers. Heavy hands crack across the backs of your heads. Tonight, your weakness is their entertainment.

You sit for painful hours as you wait for your parents to fall prey to their debauchery, respecting the tradition of the hunt until they have all fallen to blackness from drink.

Then, finally, not hours from the coming sun, you fall asleep and dream of glory, honour…

And, more than anything, fear Crom descending from the heavens and fucking your skull to pieces.

When you wake, it’s not with a warm sun on your face, but a boot of shit and mud and guttural laughter from your fathers. Here, at the foot of the mountain, the sun is barely casting light in the deep shadowed valley. The Blood are ready to fall on the trail and head into the dark woods that lie across the river. A hazy, wet fog greets your morning.

This is the day you shed first blood. And, if you survive, the day you become a warrior of the Cossian people.