Rat Queens was formally announced this weekend! I’m so excited for this series that will be coming out in September of this year. This really is my homage to decades of playing D&D, loving fantasy books and video games and wanting to do my own version of it in a long form story.

This is an ongoing series and if the fans love it, it could go on for many, many years. Here’s some links with interviews with more details! 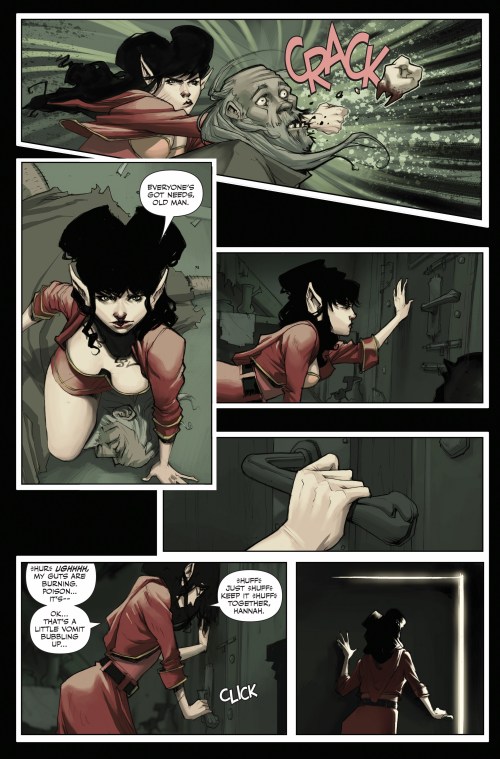 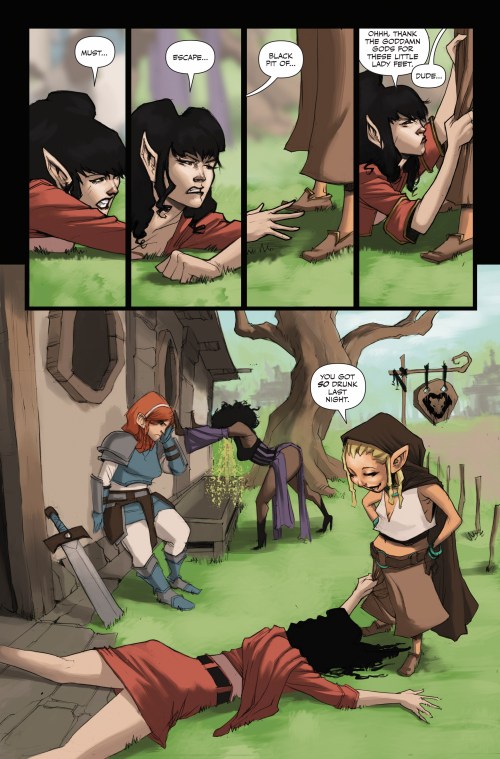 C2E2: Realization and a Thank You

I’ve just returned home from a whirlwind tour to Chicago Comic Con where I had a delay on every single flight, was pulled aside by both customs AND security, and yet managed to still have a wonderful experience. So, here’s some thoughts from my weekend.

Unfortunately as my flight to Chicago was delayed in Toronto, I missed the entire show Friday. I had this real calm moment, though, taxiing from Chicago O’Hare airport to the Hyatt Regency. I was listening to a new Sigur Ros album I’d downloaded and the window was rolled down and it was this sort of calm before the storm, seeing all the old brick apartment complexes and turn of the century factories and warehouses. Chicago has this real old world charm in the outlying areas.

When I finally arrived, I got settled into my room and then took a stroll about the hotel to see who I could find. I happened across Adam Gorham, a gentleman I’d met in Toronto in Fall last year and he was on his way to meet up with Ed Brisson. From there I ended up running into a bunch of other comic creators and despite a very long day of travel, I stayed up late chatting and getting caught up with people.

Saturday morning rolled around. I was tired and expected a moderately busy day as convention Saturdays usually are, so I arrived about 30 mins before the show and got set up. What happened on Saturday was far from what I ever expected.

Within minutes of the show floor opening, there was people at my table. A small line of 3-4 people waiting to buy the blank sketch variant of Peter Panzerfaust #10. Truthfully, I was surprised. And the line just never went away. I only really escaped my table twice; once for the Peter Panzerfaust panel and once to go meet Ron Perlman.

It was the Panzerfaust panel and the number of people who came to talk to Tyler and I at our table that inspired me to write this after show summary.

The panel was great and, honestly, the greatest part for me was when I would talk about the characters or the story, seeing real audience excitement at some of the announcements about the future of the series. Those people, the fans, they were there for OUR series. They genuinely love what we’re doing and it was really in that moment that I realized for the first time that Peter Panzerfaust is bigger than I ever imagined. And after, having fans come and talk to me and thank me for writing it, it all hit home for me this weekend that I’m writing something that means a lot to many people.

The rest of the convention was great, I got to spend some time with Meg Dejmal and Roc Upchurch, my two co-creators on the series I announced this weekend called Rat Queens. I caught up with other writers and artists I only really see once or twice a year. It was a fantastic experience, one my best conventions in a very long time.

But, at the end of the day, it was the lightbulb moment about Peter Panzerfaust that will make it a very special one. And really, that’s all because of the people who have given me their time, money and trust and supported this series either from the beginning, as new readers, as speculators, as Summer Glau fans, as anyone who’s been involved in any capacity of spreading the word about Peter Panzerfaust.

This is a thank you to all the people who’ve kept this series alive and inspired me this weekend. It’s given me a new fire. It’s breathed new confidence in my craft and I am honestly trying to finish this blog post as quick as possible so I can start writing more Peter Panzerfaust and more Rat Queens.

And despite the frustrations I’ve often felt, I know now more than ever that there’s nothing I’d rather do.

Honestly, I was never really a person who thought I’d get one, it seemed pretty silly for someone like me to put anything like that on my body. All my experiences over the past few years have fundamentally changed me in a lot of ways, however. With my move to Vancouver I was, to some degree, pressing a reset button on my life. A new city, a new start.

After a month in Vancouver, the idea of a symbol, something permanent, kept coming to mind. A marker or milestone to represent what I’d endured, how I’ve changed and how I always want to strive to be a better man.

The frog is the symbol I chose. In Egyptian mythology, the frog is a symbol for rebirth and regeneration. It was something that I’d worked into the theme of Green Wake, a series that as many know is near and dear to my heart. This specific image was illustrated by Riley Rossmo for a promotional piece for Green Wake that never really saw the light of day. It’s pretty awesome to have this part of both Green Wake and an original piece of art by a good friend encapsulate a new beginning.

Tyler and I have known about the voice casting for roughly a month now. Not only were we rather floored by the news of who’d be playing Hook, Peter and Wendy but we were sent photos and voice clips from the recording session. To hear dialog you’ve written be brought to life by actors you’ve always really enjoyed it something I won’t even bother putting in words how it made me feel.

Here’s the link to the official press release from Image, and a brief snippet below:

Wood and Glau voice the indomitable characters of Peter and Wendy, while Perlman brings to life Peter’s arch-nemesis, the Nazi officer Kapitan Haken, the series’ incarnation of Captain Hook.  Basco, who played Rufio in the 1991 movie Hook, will return to the Neverland universe as the voice of Alain. The world premiere of a trailer for the motion comic will be shown at a panel at the Chicago entertainment convention C2E2. The session will feature PETER PANZERFAUST creators Wiebe and Jenkins and Jeff Krelitz of Quality Transmedia, and takes place on Saturday, April 27 at 3:15 PM CDT.

So, the official title of this series I’ve been teasing for the last month is Rat Queens, and here’s another teaser with all the ladies slaughtering helpless goblins, orcs and trolls. Also, follow this link to our Facebook fan page where we’ll be posting the newest teasers and information about what exactly this whole C2E2 thing is. http://www.facebook.com/RatQueens 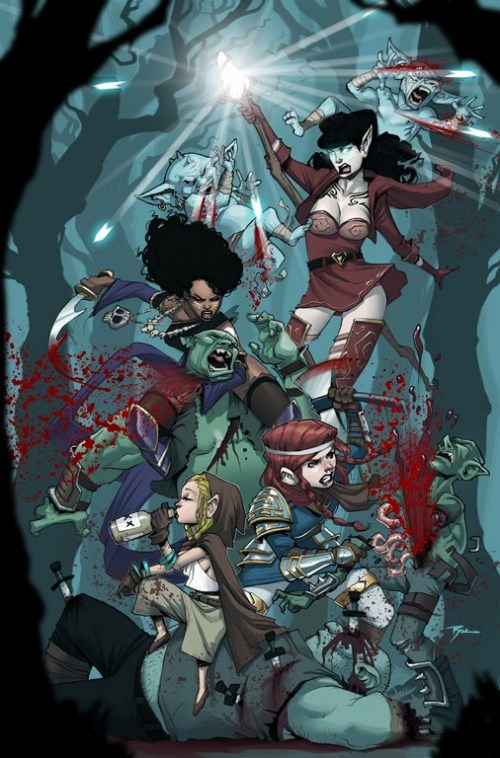 The last of the four characters in my new series. More information is going to be announced at C2E2 at the end of the month, plus we still have a few more teasers coming your way! 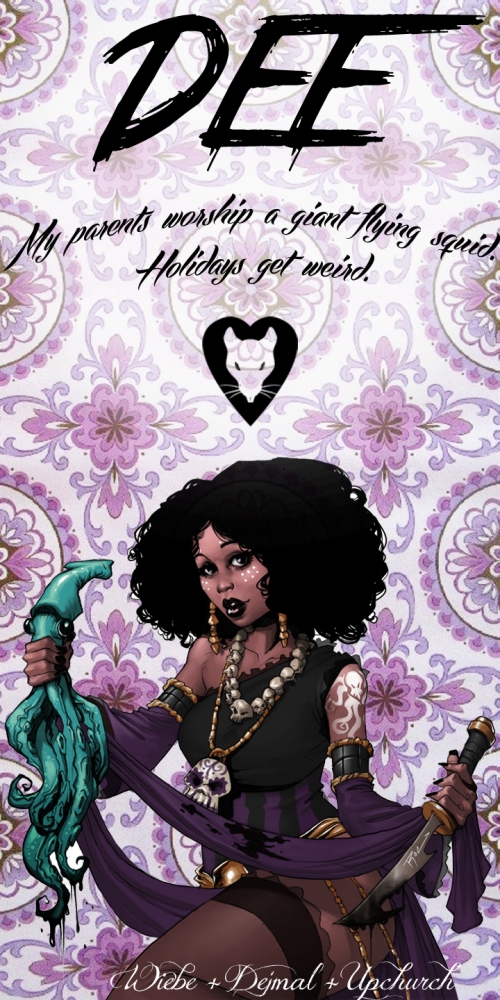 Here’s our newest addition to the cast of my new series! Betty, the hard drinking Hobbit! 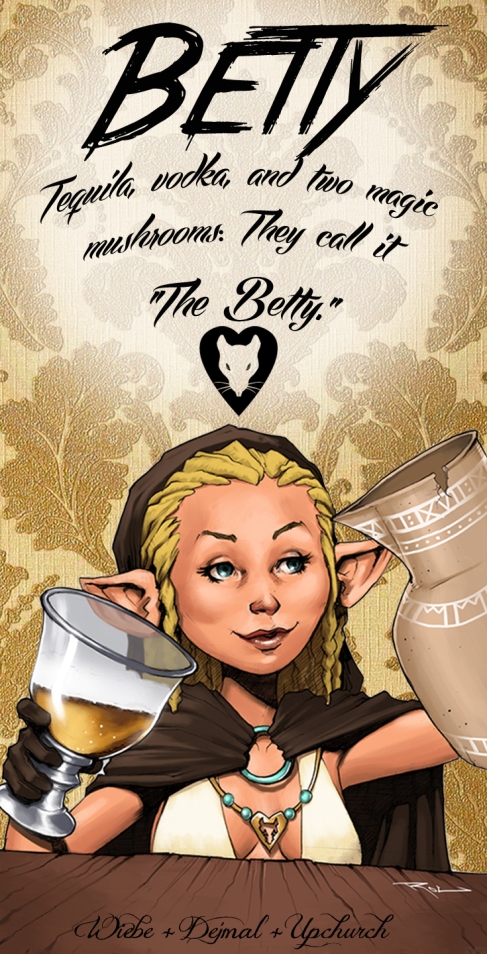