We Are The Rat Queens!

We’re two weeks away from Rat Queens #1! Finally, our full unveiling of all four of our lady mercs, each of which have their own special covers which you can order from your LCS! Please join our Facebook page and help spread the word of our series! We want to do this comic for many, many years.

We’ll also be having a monthly letters column each issue. Send all your thoughts and questions to:

Without Further Ado, here are…. the Rat Queens!

Born in the backwoods swamps on the ass end of the continent, Dee was doomed to isolation and brainwashing from the beginning. Those that surrounded her, friends and family, all belonged to the Chosen of N’Rygoth, a weird and deranged cult of divine magic practitioners.

Now, after seeing the vast cities and meeting people from diverse cultures and beliefs, Dee has lost her faith and, ironically, become an atheist. 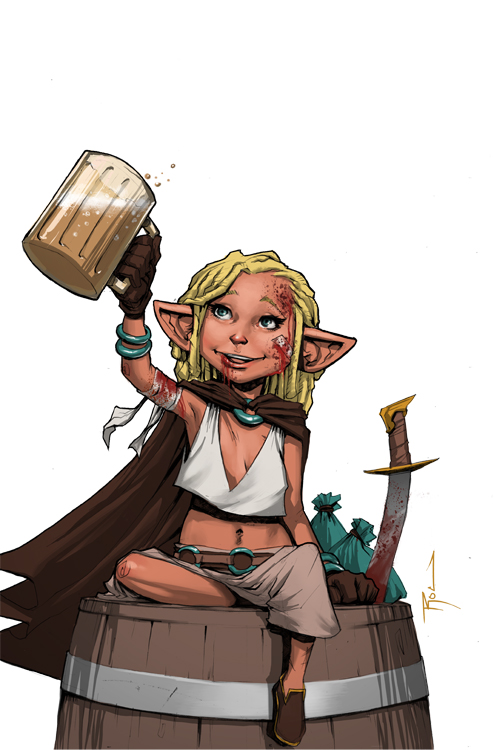 Betty’s sweetness and charisma has always made fitting into any crowd easy and as such is popular no matter where she goes. Betty’s long history of fleeting lovers has, over the years, taught her many unique skills, a primary one being that of a talented thief.

She’s a bit of a jack of all trades and probably one of the most sincere, loving drug users you’ve ever met.

The daughter of a wealthy artificing family, Violet grew up around revolutionary inventors and smiths. She was trained in the use of armour and weapons the day she was strong enough to pick up a blade and put on a suit of armour, which, as a young dwarf, was roughly ten human years.

Born to the nefarious necromantic couple, Rizo and Jadah Vizari, Hannah was introduced to the dark side of magic very early on. Raised in a constant environment of black magic, she never realized that the path she walked was corrupted and would eventually lead her to corroborating with demons and pacts with devils. It all seemed quite fucking normal.

4 Comments to “We Are The Rat Queens!”