Rat Queens #2 hits stands today and we are super lucky to have a pretty hilarious backup story written by Pat Rothfuss and illustrated by Nate Taylor.

I’m very proud of this issue. I’m always very critical of my work, but this is one of those times where I can feel confident with the final product. Owen Gieni has given the series new life for me. The process we go through each issue is much more involved. Since this issue in particular, we’ve sat down on the phone and broke story from scene to scene until we have the whole thing plotted. In that way, we’ve been able to make jokes stronger and plan for a tighter long game as we plant early seeds now.

I’m thrilled to be back with Rat Queens. I love it again.

PS: That issue 2 B cover is a tribute to Larry Elmore’s classic Dragonlance piece. 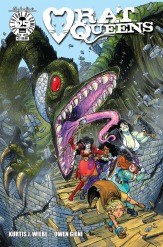 It’s hard to believe how fast the time as blown past since we announced the return of Rat Queens back in November. Owen and I had been quietly working away on the series for a long time before the announcement, we’d finished a full issue and most of the second issue by that time. It was really difficult to keep it under wraps because I was SO fucking proud of what we were building.

It was almost therapy to launch Rat Queens at Emerald City Comicon this year. ECCC has always been a Rat Queens kind of crowd. It’s the place where I first noticed how much the fans loved the series, and more than that, they loved Violet, Dee, Hannah and Betty.

To see so many happy faces, so many people genuinely happy we brought the series back, it was a huge relief. A highlight of the entire show was when I received a hand written letter from a reader who couldn’t get me to sign in person, and her friend delivered it. It was first thing in the morning, I was just setting up. I read it and I had to hold back the tears. It was such a beautiful thought for someone to take time to send me. And, if you’re reading this right now, you know who you are, and it meant the world to me that morning.

I’ve been home since Tuesday. I’ve recovered from the show. And now I’m sharing the news that Rat Queens #1 sold out and that we’re going back to another printing. It’s all so surreal.

So, this is a thank you. To the retailers, for continued faith in Rat Queens, to the readers who have loved these characters through everything, and to my publisher, friends and family, for believing in me.

I can’t wait for you to see everything Rat Queens has in store.

Get Killed by the Rat Queens!

Owen and I have teamed up with Pat Rothfuss and his team at Worldbuilders for this year’s charity event! For every $10 you donate to our #TeamRatQueens page, you earn a shot at being cameo’d and then horrifically slaughtered by the Rat Queens in an upcoming issue!

All the details are here:

As a bonus, because the Rat Queens family has already donated over $2000, I’ve offered to run a live stream over at our regular Twitch site tonight, December 2nd, at 7PM PST!

Our fundraiser lasts for seven more days, let’s see if we can meet that $5000 goal, everyone! Thanks to all who have graciously donated to the cause, and good luck!

We have one more MAJOR announcement about Rat Queens coming very soon. I’ll post about it once the news drops!

Here’s an interview over at CBR about our return to Rat Queens plus a bunch of preview pages, which I’m also posting here!

Super excited to be working with Owen Gieni! 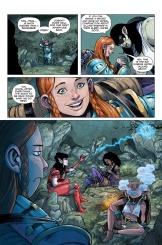 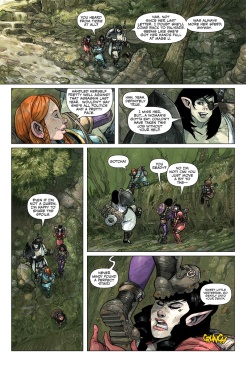 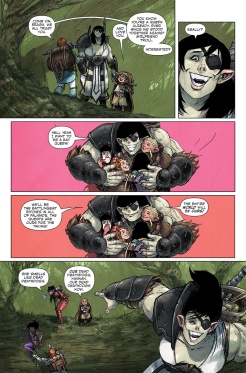 This year has sped by at an unbelievable rate. It feels like only a few weeks ago Jim had green lit this project for July and this is all I had written (yes, this is copy pasted from the actual pitch document.)

With the world in ruins, humanity struggles to survive in sprawling cities of garbage and debris. Ancient spirits stalk the urban decay, manifesting in the flesh by crafting bodies of the refuse that litters the land. One young warrior woman uncovers the legend of the last source of fresh water in the world and sets out to find it, but a spirit learns of her plan and refuses to let her go it alone. Together they travel the world in search of the last bastion of pure nature.

Debris is a colourful, high action adventure series of Red Sonja meets Transformers, with creative interpretations of mythological monsters blended with modern urban technology and a spunky lead heroine who kicks all kinds of ass.

Debris is a miniseries told in 5 issues.

There are no spoilers, obviously the story has changed quite a lot so nothing has been ruined by reading the above outline. Still, I was a bit overwhelmed when Jim not only moved forward with just the above outline but also gave it a date. I emailed back and said something to the effect of, “Jim, this is just an idea, I haven’t written it yet.”

Anyway, collected below are some early reviews for the series. I’m excited because it looks like people are very happy with our first issue.

Decapitated Dan: “when I get a chance to cover anything by Wieley, I will. They are a team to be reckoned with, pushing the envelope on great original content, and proving why comics will always be a fun medium. Read Debris, you will not be disappointed.” http://fromthetomb.wordpress.com/2012/07/22/debris-1-review/

Team Hellions: “This world cries out for a hero and her name is Maya.  In one issue we are gifted with a new female icon in comics.  Stronger, faster, smarter than any of her “peers” – if anyone could truly be called an equal.  She is the strongest hero in this world given the seemingly simplest of tasks.” http://teamhellions.com/2012/07/09/debris-1-advanced-review/

Multiversity:  “Maya, our heroine, is really put through the wringer, emerging at the end of the issue as a flinty, independent personality who’s going to do her damnedest to make things right. It’s always heartening to see a strong female character in a comic – and she’s even wearing clothes! – but even without the gender factor, she’s got an arresting air and charisma to burn.” http://multiversitycomics.com/reviews/wiebe-and-rossmo-craft-a-colourful-sci-fi-world-in-debris-review/

Here Be Geeks: “the setting is beautiful, enough weird things are happening, and that Maya herself is quite the fun character to read.” http://www.herebegeeks.com/reviews/comic-preview-debris-1/

Comic Buzz: “It’s clear from the outset that Wiebe is crafting a grand narrative. The future setting and the large garbage monster Colossals give an instant sense of scale, but the focus on Maya makes sure that the
story doesn’t get lost in the setting or set pieces. There are some difficult moments for Maya to deal with in this issue, both physically and mentally-” http://comicbuzz.com/2012/07/review-debris-1/