Hail to the Queens!

This Is Me Now

It was early 2012 when the core concept of Rat Queens came together. I’d been in contact with Roc Upchurch after meeting him randomly on a street corner over the weekend of NYCC in 2011. I’d seen his work on Vescell and was inspired by it. He was making art in a way I’d never seen in a comic series.

While he finished Vescell, we emailed several times, batting around ideas. We’d attempted a small pitch on a concept that I’d originally worked on with Owen Gieni (who, in a strange twist, became a later Rat Queens artist), it was called Goblinettes, and it ultimately didn’t float. Didn’t seem like there was much interest in a story about a three-piece all girl goblin punk band that sang about love and getting along.

I sat and thought on it awhile. I asked myself all kinds of questions. What did I love about fantasy? What was ridiculous? What was annoying and outdated?

It wasn’t a new thing for me to have female leads in my stories; Debris, The Intrepids, Beautiful Creatures and even Peter Panzerfaust, while predominantly male, had women that are, to date, my favourite I’ve written.

Having four female leads wasn’t the novel idea, in my opinion. What I wanted to do was have a fantasy adventure story where being a woman wasn’t a thing. And in so many of the fantasy books I’d read, it almost always certainly was.

We did a call and I laid out the idea that I’d come up with in the worst way possible: It’s Lord of the Rings meets Sex in the City. We both laughed. It was a terrible mash, but we both knew what it meant.

That’s where it started. Where it would land, how it would end, we had no idea. Our best guess was five issues and a good looking trade collection.

On that day, my life changed.

Within months, Rat Queens became the most successful project I’d ever worked on. Both in sales and in the acclaim it garnered from an industry, a community that had become so important to me. It was the highlight of success after years of personal struggles that had nearly sapped me of hope and strength.

And it was good for a while. We always struggled to get the series out on its monthly schedule (I have many thoughts about the industry’s demand on artists, but that’s for another time), but we were creating something we loved and the fans loved in returned. It was the best a creator could ask for.

Since then, it’s been a long and difficult journey. The years following September 25th, 2013 have been a trail through the highest mountains and the darkest caves.

I had a daughter.

I finished several others.

It’s no secret Rat Queens has had its share of controversies. They took a heavy toll, bringing me back to a dark place I thought I’d escaped when this Rat Queens journey began.

Even then, I kept creating new stories with these four women throughout it all. But, I have to be honest, it was getting more difficult with each new iteration. Each new artistic team that came on. 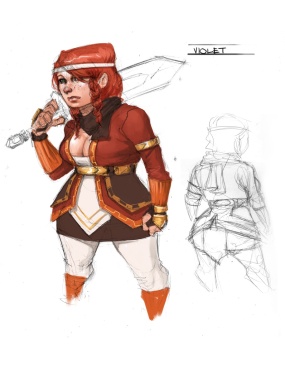 At the end of the day, I had to step back and ask myself some familiar questions: What did I love about fantasy? What was ridiculous? What was annoying and outdated?

This past summer of 2018, I found that I didn’t have the answers I used to. Or maybe I’d already answered them and somehow lost myself along the way.

In that reflection I realized that I’d been burned out on the one thing that once gave me joy and provided for my family.

And then I knew: it was time to move on.

That fear only grew, but it was the seed to plant a new foundation. I’d wrapped up so much of my identity in Rat Queens; my worth, my voice, and world-view.

Five years is a long time. We all grow and change, day to day, and over the span of five years, I’ve faced many shifts to my status quo.

Those changes excite me, I want to write about them. While that doesn’t mean the Rat Queens can’t be part of the equation, it means that I want to commit the next span of years to these new perspectives that have deeply informed my life.

So, I’m saying goodbye to Rat Queens. For now, and the foreseeable future.

Rat Queens is still popular. I know fans love these characters, and I’ve always been interested to see what other people would bring to the table with this large cast of characters. There are still a hundred stories that could be told with Betty, Hannah, Braga, Dee and Violet.

With that said, I’m passing on the torch to a new team, a group of amazing creators who will carry on the legacy of the Rat Queens in an exciting and new direction.

Ryan Ferrier, who has lettered the series since we came back in 2017, will be taking over writing duties. He was absolutely the first choice for me. We share a similar sense of humour and he’s been living with these characters for over a year now. If you haven’t read any of Ryan’s work, I HIGHLY recommend D4ve. It was my first foray into his work, and it’s genius and funny and heartfelt and great.

Our new line artist, Priscilla Petraites, is someone I’ve been watching for years. She has emailed me every year since 2014, always sending me her new portfolio, to show her progress and growth as an artist. I’ve always had an interest in working with her, but could never find the right concept for the collaboration. When I decided to move on from Rat Queens, Priscilla was an obvious choice. And the heavens aligned, schedules collided and Rat Queens is now her baby.

Marco Lesko and Priscilla had worked together on several other projects as a team before coming on to Rat Queens. I’d seen their work together and bringing Marco onto Rat Queens as our colourist made absolute sense. They have an artistic chemistry that drips off the page, and I can’t wait to see them craft their take on the world of Rat Queens.

This new team will be taking over in April, 2019, with their one shot: Rat Queens Swamp Romp, before jumping into their full-time duties with issue 16 in June.

So. What’s next? And what about current Rat Queens artist, Owen Gieni?

In the past few years, Owen has become like a brother to me. He’s been around through the toughest of times and has always been an honest and stalwart friend. Through our long conversations over the years, we’ve discussed hundreds of theories and philosophies, and even more stories and worlds.

It’s time we did something with them.

Together, Owen and I are founding a creative company; Beast and Bone Studios.

We’re going to be creating a pile of new art, comics and otherwise. We’re finally going to get a start on a series we’ve been talking about since summer of 2017. Plus a few others we’ve been hashing out in the last few months. I cannot wait.

First, I want to thank Jim Valentino, the man who saw something unique in this little series. He backed me through everything, and has supported my decisions, both creatively and professionally, and it’s been a fantastic journey. I call him my second dad for a reason!

And finally, I want to thank every single person out there who’s supported Rat Queens, and more directly, supported me through the past five years. It has never been unappreciated, and the kindness you’ve shown through emails and messages has saved me more than you can know. I will be forever grateful for the fans and to the five Queens who made my current life possible.

Here’s to you, Violet, Dee, Hannah, Braga and Betty.

Especially you, Betty. You know you’ve always been my favourite. 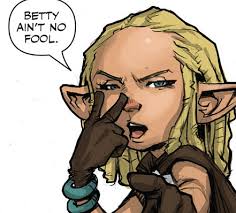