One year ago, I woke up with the worst headache I’d had in my life. By 11am, I managed to call a car to bring me home, as I’d spent the night at a friend’s place.

On my phone were several text messages from my partner, asking where I was. We had made plans for the day, and I had been expected home hours earlier. My responses were apologies, a sad recurring theme in the weeks and months leading to this fateful day.

The first thing that hit me as I crawled into the Uber was a familiar feeling of anxiety, an issue I had always battled but on this particular morning it was a goddamn demon. I’d been experiencing panic attacks more regularly leading up to the day, which was odd, I’d never had them until the Spring of 2019.

Back home, I could see through the car window that the day had long started without me. My daughter had set up her lemonade stand for the first time on the sidewalk outside. It was full of fanfare, yellow and bright, an excited child thrilled to see Dad stood behind it’s inviting storefront.

Dad had promised to help her set up the stand and sell lemonade alongside her.

It was well past noon. She’d been waiting for hours.

I apologized, fully ill and wracked with the early stages of another debilitating panic attack. I lied and told her I’d be back in a little bit after some rest.

I walked into the house, desperate for a dark room and enough pain meds to get me through the day. I realized in that moment I’d forgotten we also had guests from out of town visiting. They had already arrived, sitting and having tea with my partner as I stepped into the house like some horrific undead monster.

I made excuses about my headache, apologized that I needed to excuse myself and shamefully hid in the basement while I suffered through the worst few hours of illness and regret I had ever experienced.

But this time, unlike the previous instances that were happening with alarming frequency, I couldn’t hide from the facts anymore.

I Am Not Deryk Whibley

I laid in the dark for hours, sweating, my heart racing, terrified that I was dying but too embarrassed to ask for help. I was desperate for escape, something to take my mind from the vomiting of poison from my body.

I reached out for my tablet, maybe music or a video could help with the escape.

I opened Youtube, and the first video that showed up on my suggestions was an interview with Sum 41’s Deryk Whibley, the singer who barely survived his battle with alcoholism.

It was a strange recommendation; I hadn’t watched or searched anything related to him or his band, and I couldn’t think of any association that would land this on my front page. But I watched it anyway.

Everything he talked about resonated with me, so much so that at the end I decided to take a break from drinking. I wasn’t like him, absolutely not, but I could use a break.

I could acknowledge that my drinking had increased, not only in how often, from once a week to every other night, but in the amount consumed. A 26oz of Jack Daniel’s for an evening wasn’t cutting it anymore.

By 10pm, I finally emerged from the basement. The whole day, all of its little bits of magic having passed me by, and a disappointed daughter long asleep upstairs.

I had a small measure of pride in my decision to take a break, as though it wasn’t something I’d done a dozen times before with delusional promise to my partner and to myself. As though it would make a difference this time.

I went to bed with a new awareness of what I was going through.

A Spade a Spade

The next day I felt a small return of confidence having confronted a demon and beat it back for awhile. I was considering looking up some local AA meetings as a support while I took a break. To be surrounded by people who struggled with alcohol and to be able to have open conversation about the topic without fear of judgement could be what I needed to get through this period of time.

After all, I wasn’t Deryk Whibley, he was an alcoholic.

Then, I received a phone call. A friend checking in, who said he’d been thinking about me and wanted to see how I was doing.

I confided in him that despite doing better today, I had a terrible few days leading up to it.

I relayed the story to him that I will relay to you now.

It was the Friday night when I caught an Uber to a friend’s place for a BBQ. I had the request to bring some whiskey for everyone to share, which I willingly obliged. I brought a 40oz, more than enough for five people even though there was only going to be three of us.

It was a good night, but I don’t honestly remember much of the back half of it.

When I woke up the next morning, my friend came to check in on me, to make sure I was OK. I told him about the aforementioned headache, but I lied and said I was good. It was becoming a default fabrication, now more commonplace than ever.

I don’t believe he bought that lie, his worried expression didn’t dissipate when he told me that the entire 40 was empty. I didn’t believe him, there was still a quarter of it left when I went to bed. (Even though I didn’t remember doing so).

I found the bottle. And it was as he said. Empty.

Thing is, my friend and his brother only had one drink each from that bottle.

The rest was on me.

After I relayed the story to the friend who had called, he went quiet for a moment, maybe trying to find the best way to have an important conversation. Meanwhile, I assured him that the AA meetings I’d planned to attend were merely a support system while I took a break from the drink and reassessed my life. I told him about the YouTube video I watched.

My friend opened up to me about his own experiences with alcoholism in his family. About the stress and sadness it spread from one person to many others. He talked about family meetings with Al-Anon, as the family members left to deal with the impact of an alcoholic they loved.

As he spoke, I felt a deep sense of dread coming over me. And as though to surface all of that pain, that denial and sadness, he told me to ask myself two things

One, can you have just one drink?

Two, is it taking from the joy in your life?

All I could think of in that moment was my daughter’s face when she saw me coming up the sidewalk. Joy. And the moment when I lied and it all collapsed into disappointment.

That would be the legacy I’d give her.

That friend saved my life. I hope he knows that when he reads this.

I owe you everything for reaching out and checking in on me. Because I couldn’t have just one drink. And I had no joy left in my life.

I am Deryk Whibley. I am an alcoholic.

Today marks the first year of sobriety in the rest of my life.

For the legacy I will leave for my daughter and my partner who never gave up on me through any of it.

There’s been an ongoing joke about how often our family moves. Over the course of seven years, we have moved nine times. Four cities, two provinces and two countries.

Every time I would see the change as a new start. A fresh beginning. Because, the truth is, I’ve been aware of my discontent and unhappiness all along. I’d deceived myself into believing that the sadness was somehow borne of external factors and that a change in them could right the course of my life.

There are many issues that led to a very quickly spiraling addiction to alcohol. Of the most relevant was when I faced a crippling blow to my professional comic career in 2016 that never recovered. I was desperate for approval with the community I had placed so much of my identity and worth in. I saw the trajectory of my career, what it could’ve been and how it crashed and could barely face the despair of it.

I placed so much value in my identity as a comic writer that losing it was tantamount to dying. I had no value. No worth. Even though I was loved by friends and family, that I was a papa to a beautiful daughter… I saw none of it with any value.

So I drank. More and more.

Until one day, I realized something.

It was a summer trip to Vancouver to work at The Coalition, a video game company, for a freelance gig. And, looking back, it’s funny to me now, but then I didn’t see it as potential career for me. My mind was still so focused on vindicating my reputation and pedigree in comics that my success in video games didn’t even register.

But, after a week at the studio, of being thanked for my work and feeling a continual sense of appreciation and welcome, something clicked.

I could turn my talents anywhere.

These two things, of realizing the depth of my addiction and how disillusioned I was with my identity, came together at the exact right time.

I decided I needed a new start, but this time with all the understanding of why and what needed to change.

It remained what the answer had always been: me. 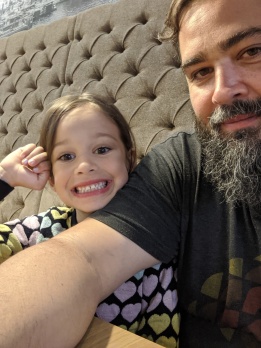 A father and a husband.

I take pride in my writing, but it no longer defines me. I have spent fifteen years refining my skills as an author, but none practicing them as a father and husband. These traits do not, generally, come naturally, as I am slowly learning.

My sense of self isn’t weighted on the success or failures of my creative life, but rather by the legacy I will leave in my daughter’s life and by the support I can be to my partner. Because, when this all goes away, it’s ultimately the two of them I will have to answer to, and who will be at my side if I get this right.

And I won’t always. But I’m no longer living as a culmination of all my failures. Instead, I choose to celebrate the victories and fix the problems as they present themselves.

I am Kurtis Wiebe.

But a sober one.