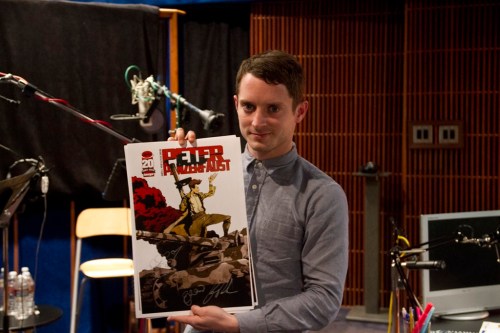 Tyler and I have known about the voice casting for roughly a month now. Not only were we rather floored by the news of who’d be playing Hook, Peter and Wendy but we were sent photos and voice clips from the recording session. To hear dialog you’ve written be brought to life by actors you’ve always really enjoyed it something I won’t even bother putting in words how it made me feel.

Here’s the link to the official press release from Image, and a brief snippet below:

Wood and Glau voice the indomitable characters of Peter and Wendy, while Perlman brings to life Peter’s arch-nemesis, the Nazi officer Kapitan Haken, the series’ incarnation of Captain Hook.  Basco, who played Rufio in the 1991 movie Hook, will return to the Neverland universe as the voice of Alain. The world premiere of a trailer for the motion comic will be shown at a panel at the Chicago entertainment convention C2E2. The session will feature PETER PANZERFAUST creators Wiebe and Jenkins and Jeff Krelitz of Quality Transmedia, and takes place on Saturday, April 27 at 3:15 PM CDT.